Monitoring My Bedroom's Ambient Temperature with the DS18B20

My Raspberry Pi 4 has been collecting dust on my desk ever since I used it to analyze my friends’ favorite curse words. I figured I’d get my hands on some new hardware and monitor the temperature of my room using the DS18B20 temperature sensor, Rust, PostgreSQL, and Grafana.

My goal was to plot a graph of my room’s temperature over time, which can be broken down into 3 sub-goals:

I suppose item 1 has the prerequisite of getting the temperature sensor to actually transmit readings to the Pi, so let’s start there.

Aside from building mine and a couple friends’ PCs, I have no electronics experience. Thankfully, the kit I bought made the hardware work about as simple as building a PC. All I had to do was connect the right wires to the right pins. The kit came with an adapter module with a screw terminal and resistor, so I didn’t even need a breadboard. 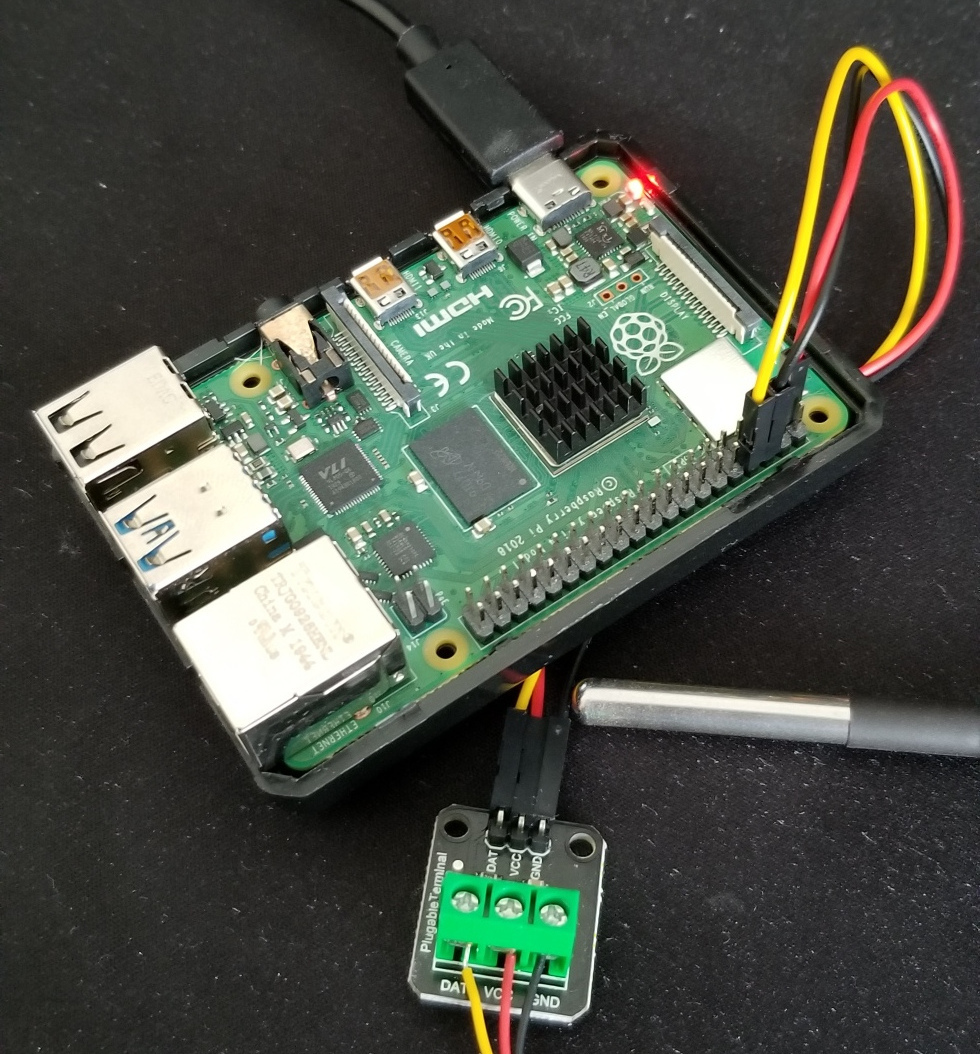 Now that I had all the hardware connected, it was time to enable the 1-Wire interface on the Pi.

Enabling 1-Wire consisted of simply adding the following line to the Pi’s /boot/config.txt file and rebooting:

If you’re trying this for yourself, it’s important to note that gpiopin should be set to whatever GPIO pin you connected the DS18B20’s data line to.

If all went well, I should see a file /sys/bus/w1/devices/$ID/w1_slave/, and reading it should give me some meaningful output.

Success! I’m not sure what the hex values represent, but some quick experimentation showed that t=X represents the temperature reading X in degrees celsius, multiplied by 1000. 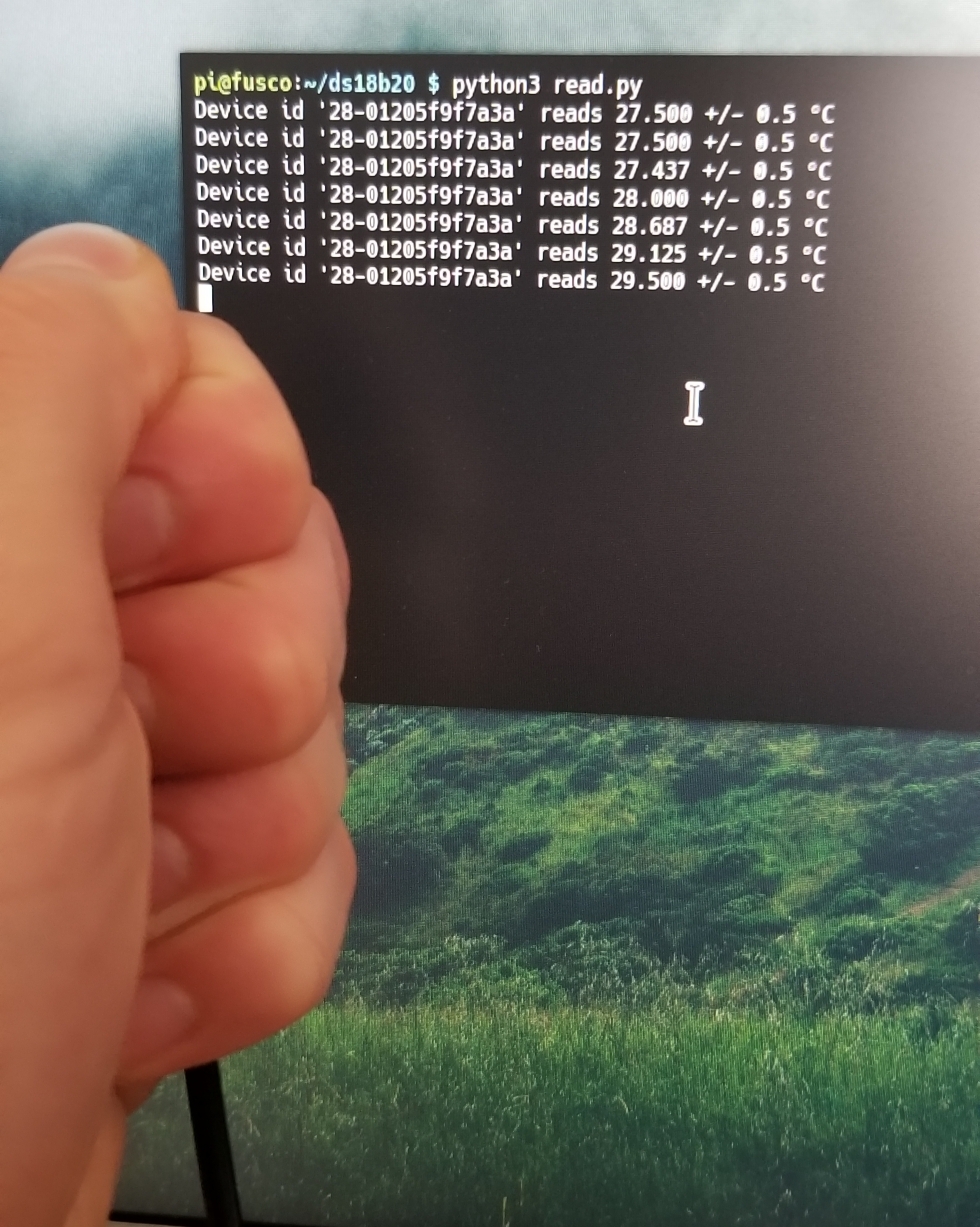 Now that the sensor works, it’s time to start writing some code.

Python would be the sensical choice for this project. It’s simple and would run on the Pi with no trouble.

But where’s the fun in that? I’ve been itching to write some Rust code recently. It’s a great language, and the issue of cross-compilation seemed a more interesting challenge than having Python code Just Work™. The first step in the journey was to get any Rust code to successfully cross-compile and run on the Pi, so I started with Hello World.

Cross-compiling Rust code to run on the Pi proved to be fairly straightforward. All I had to do was

Item 3 was simply adding the following lines to my user’s .cargo/config file:

To make my life easier, I also wrote a quick shell script to automatically build the program, copy the binary to the Pi, and run it. I still have to type the Pi’s password twice, but it’s better than nothing:

I won’t go into too much detail on the implementation of the parsing/recording logic. If you like, you can view the source on GitHub. Essentially, the program does the following in a loop:

I added the support for a delay between readings primarily to save on disk usage. Without the delay, the program was getting a reading evey half-second or so, and this project doesn’t require anywhere near that level of resolution. I’ve been running it with a minute delay between each reading, and that seems to generate a clean and accurate graph.

Creating the graph was dead simple. I already had Grafana set up for a previous project, so all I had to do was create a new dashboard and create a graph with time on the X axis and temperature on the Y axis. 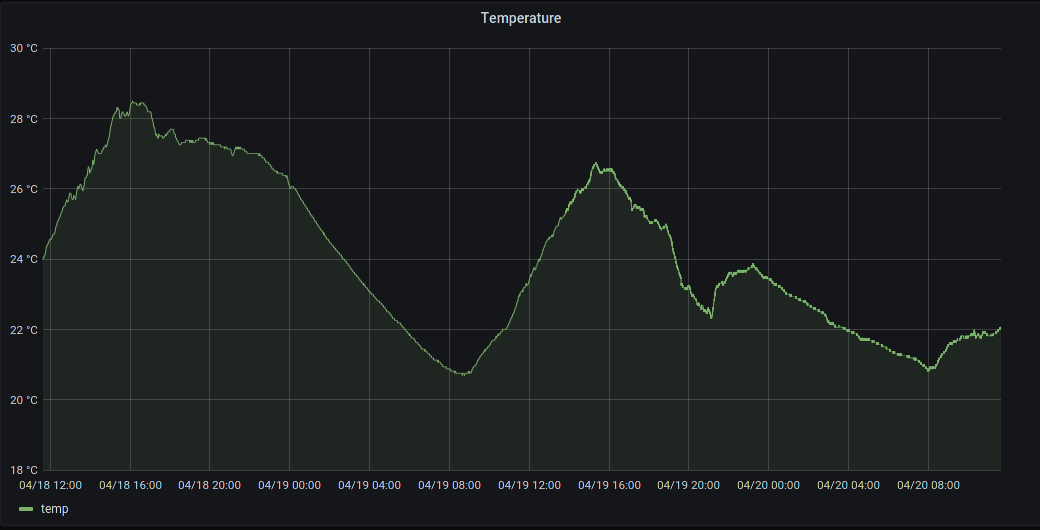 This was a fun little project to get my hands on some new hardware and make a pretty graph. Once I’ve collected more data, I might do some more analysis using pandas and matplotlib, but I’m happy with my results so far.